Grand Tracadie is a rural community in Queens County, PEI.  The name Tracadie, which is of Mi’kmaq origin, means “ideal camping location” and is pronounced tǔlakǎdǐk.  Tracadie Bay is located on the scenic north shore of P.E.I., and is surrounded by the National Park and the warm waters of the Gulf of St. Lawrence.  It is close to Charlottetown, the cultural hub of P.E.I.  Every summer in August, the community celebrates Tracadie Days.  John Alexander MacDonald, a former member of the Canadian House of Commons and the Canadian Senate, was born in Tracadie in 1874.  Sir William Christopher MacDonald was born in Tracadie in 1831; he went on to become a tobacco manufacturer and major education philanthropist.

As seen below, we introduce you with some interesting information about Grand Tracadie, the land rich in history and heritage.

“Illustrated Historical Atlas of the Province of Prince Edward Island” by the J. H. Meacham Company, published in 1880

The Hotel Acadia, originally called the Lorne Hotel, was located near the old Tracadie Harbour, on the property just above the shore facing the dunes of Blooming Point.  It was built in 1872 by Messrs P. W. and F. W. Hyndman.  Though it passed through several hands in 1894 it was operated by a man named Isaac C. Hall who had owned a fish plant and cannery on Robinson’s Island in the 1870’s.  The large resort which could accommodate ninety-five patrons featured a natural spring, ocean bathing, a golf course, lawn and basket tennis, croquet, bowling, carriages, saddle horses, two large sail boats, several row boats, sea and river fishing, and very nice walking paths.  The hotel yacht was operated by an experienced fishing captain who supplied the hotel with fresh fish daily.  In 1906 the hotel advertised that they had added a new motor boat to their long list of attractions. 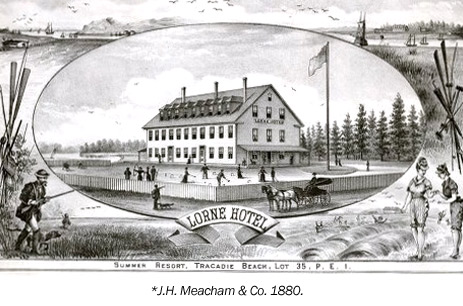 The Hotel Acadia was built in 1872, and located in the vicinity of the Grand Tracadie Wharf.  At the time of its opening, however, it was known as The Lorne Hotel.  With space to accommodate up to 95 guests, the hotel was reputed to be quite luxurious with a large roster of onsite activities and amenities, as well as engaging geographic features such as a natural spring and its waterfront location.

This brochure was produced on May 11, 1905 and to advertise the Eleventh Season opened from July 1, 1905.  The brochure features the names of American tourists who stayed at the hotel in previous years and gives a detailed description of the hotel and its many attractions.  As evidenced by this 1905 brochure, Mr. Hall catered to a large American clientele.  The brochure indicates that passage from Boston to Charlottetown by ocean liner in 1905 cost $10.00-$14.00 with the train fare from Charlottetown to Tracadie costing $0.45.  Room rates ranged from $2.00 per day and $8.00-$10.00 per week with special rates for children, servants, and groups.  There are also several photographs included in the brochure which have been numbered individually: The Hotel Acadia, A harbour view, Grand Tracadie Beach, Acadia Spring, Lawn and basket tennis, Hotel Avenue under the spruces, Campbell’s home of the gamey trout, The fishermen’s return, The Stages. 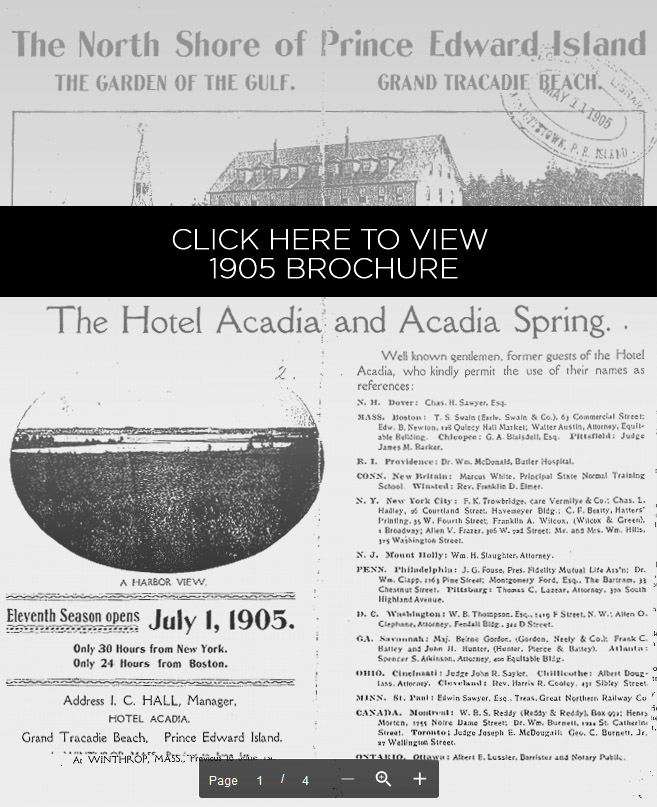 Early yesterday morning the news reached Charlottetown that the Acadia Hotel situated at Tracadie, a noted summer resort, had been utterly destroyed by fire.

The intelligence was heard almost with consternation, for the place was so well known to citizens, most of whom have at various times patronized it, that they felt more or less a personal concern for its loss.

As far as can be obtained the facts appear to be as follows.  About eleven o’clock on Wednesday evening, some young men who occupied a room on the second floor, above the hotel office, noticed smoke in their room.  On going down to investigate the cause they found that fire was smouldering at the outside northwest corner of the building, where the office is situated.

They discovered that the blaze was beneath the floor of the verandah at this corner.  Just what started the fire is not known, but it is supposed that a lighted cigar fell beneath the floor and could not be recovered, so it was left to smoulder.  Be that as it may, by the time the alarm was raised  the fire had become very evident.  The flames had spread to between the weather boarding of the front of the house and the plaster and quickly ascended to the roof of the two and a half story building.  Some attempts were made to extinguish the flames at first with buckets of water, but the fire had been smouldering so long that it had become too extensive to be extinguished by this means.

At this juncture the alarm was given to all the inmates of the house , and as it was apparent that the fire was making rapid headway, it followed that the guests, thus hurriedly notified, had to make haste to escape.

In the hurry that ensued many had to leave their clothes behind, save what they were dressed in, and in fact many were not able to fully clothe themselves.  Those who had gone to bed had to dress very hurriedly, and leave their rooms, in order to escape the smoke and the flames.

“A Whale Stranded In Tracadie Harbour, North Side Of P.E.I.”

Spacious Tracadie Bay is located just east of Prince Edward Island National Park on the island’s north shore and is protected by lengthy sandspits.  As will be seen, the entrance to the bay migrates due to forces of nature, making it difficult to mark with lights.

In March 1852, Henry Palmer, the Consular Agent for the United States on Prince Edward Island, sent a letter to the island’s Lieutenant Governor suggesting that owners of U.S. fishing vessels would be willing to contribute toward the construction of lights to mark the entrance to the harbours at Tracadie and Malpeque:

A pair of day beacons equipped with small lanterns were established at the entrance to Tracadie Bay in the 1860s, and then in 1877, open, square, framework towers, separated by 230 yards, were erected.  These new red lights were placed in operation in the spring, and a few months later they had to be relocated as the entrance channel had shifted.  In 1890, the lights from the towers were discontinued due to the formation of sandbanks in the alignment of the range, and two temporary lights, consisting of lanterns hoisted on masts, were established on the western side of the harbour.  Mariners were warned that as the channel was intricate and liable to change in any storm, strangers should not attempt to enter the harbour if drawing more than five feet.

At the opening of navigation in 1894, a new tower was used to display the inner or back range light as the former tower had become unsafe due to dry rot.  This new square, enclosed tower stood twenty-eight feet tall.  James Hendrahan built the new tower for $220, and the old tower was offered at public auction.  When the highest bid turned out to be only $4.50, the tower was withdrawn from the auction and sold to Keeper Michael Ready, who had been looking after the lights since 1868, for $8.  A gale on October 11, 1900 upset the rear tower, and a red light hoisted on a mast had to be used until the tower was put back in place.

Around 1923, a pole replaced the enclosed tower as a means to display the rear light.  Tracadie Harbour Range Lights remained in operation through at least 1955, but today, a series of lighted buoys are used to mark the entrance to the harbour.

The Yankee Gale 1851 - A part of North Shore History

The following is an excellent description of the Yankee Gale, taken from the Stanhope Sands of Time (A Community History) that was published in 1984 by the Stanhope Women’s Institute, in association with the New Horizons Program of the Department of Health and Welfare Canada.

This terrible storm sprang up on the evening of Friday, October 3, 1851 and continued through the next two days, with tremendous winds, lashing the sea to fury, and torrential rain. It came up quite unexpectedly; the weather was warm for October, the sea calm and glassy, with no wind; but suddenly a heavy swell rose, and before the fishing fleet could get to safe harbours, the storm was in full blast.  The fishing vessels were mostly from New England, and the Royal Gazette of Monday, October 6, 1851 records “…about 70 vessels cast away, sunk, or driven ashore and wrecked.  Some crews were saved, many sailors drowned; some ships lost all hands.  There are from 20 to 30 vessels on shore between Malpec (sic) and the North Cape, and in Richmond Bay and on Hog Island there are some 40 or 50 more.  It is currently reported that 60 or 70 bodies have interred on Hog Island…”

On the North Shore around Brackley Point, Stanhope and Tracadie the schooners Brothers, Nettle, Fair Play, Golden Grove, Union, Caledonia and the barquentine Nantucket, were lost.  Some crew members were saved, and warm tribute was paid to local residents who rescued and cared for the survivors; but the entire crew of the two vessels wrecked off Stanhope were drowned.  The schooner Nettle was salvaged during the following January by the MacMillan family, who hauled it up the beach and overland into Covehead Bay, using 60 horses.  The six or seven drowned sailors washed up on the beach at Stanhope were collected with horse and cart and buried in the Long Pond cemetery by Alex MacMillan, with one helper, who would not work after dark; they made rough coffins by daylight, and when night fell, Alex had to go it alone.

Fishing is still a hazardous occupation today, but in the memory of our senior citizens, the number of lives lost while engaged in this line of work has been limited; the names of Theodore Carr and Lachlan MacMillan come to mind.  Today’s larger boats with their sophisticated equipment give fishermen a big advantage over their forebears with their small sail boats and dories.